Location: 12th & Leavenworth sidewalk in front of the Bemis Center for Contemporary Art at the north end of the property (Omaha, Nebraska)

Description of the event: One lone petitioner pulled a table from the back of his van. He carried the table, supplies and cooler over to a spot just in front of the Bemis Center for Contemporary Art. He begins to collect signatures for his petition to reduce gun violence in the Omaha Metropolitan area. Another joins him as they seek signatures to their petition. They ask those that pass by if they are interested in making Omaha safer and/or if they are interested in reducing gun violence in Omaha. The goal is to collect as many signatures as possible. When asked who is sponsoring the petition, they reply that the petition is sponsored by the O.L.A.D. (omahaliveartdivision). They freely invite those that ask about the details of the petition to read the wording of the petition. The petitioners collect signatures from anyone interested in making Omaha a better place, regardless of whether they live in Omaha or not.

Petition summary and background: The Omaha metropolitan area has a serious problem with gun violence. Several months in 2007 & 2008 have seen 31 gun incidents in 31 days, which is simply not the kind of community we want to live in. It is also not the kind of community that will attract new businesses and young professionals. We won’t solve the gun violence problem by relying on tired old programs that have not proven to be affective.

Action Petitioned for: Signatures to this petition are in support of an amendment to the city of Omaha’s gun laws. Effective January 2, 2009, the amendment will require the collection of all fire arms in the Omaha metro area, an area that includes communities of Douglas and Sarpy counties in Nebraska and Pottawatami county in Iowa. Upon said collection, all fire arms will be destroyed, melted down, and fashioned into a large bunny-shaped figure. As new fire arms are discovered, the newly acquired guns will also be melted down and added to the growing metal bunny.

After they sign, they were thanked for their time and support.

Petition Statistics: 158 signatures 112 refused or declined to sign Over 50% of those that signed did not read the whole petition 23 individuals added comments to the comments field 5 contacts could be described as ‘heated’ conversations

Comments added to the petition comments field: NO GUNS!!! Tourists like us don’t like guns. Thanks. Guns Bad Good Try GOOD BUNNY BAD GUN Guns are evil Why Guns? Tell it to the Supreme Court! Yeah! Thanks! It’s time to change Crazy storm! (drawing of a bunny) Thank you. OK I prefer to guns to guns No gun NO GUNS Awesome NA NA NA NA

o No thank you. o I don’t live in Omaha. o So which of the other amendments to the constitution are you interested in getting rid of, maybe the first amendment, how about that one?! o This is awesome. o What are you signing honey? Have you read this thing? o No thank you. o Where’s the bunny going to be put? o You’ll never get this done. o Good luck. o Who’s sponsoring this thing? Who? Are you affiliated with the Bemis? o Does the Bemis know you’re here? o (After pulling over, a woman jumps out of the passenger side of a red SUV and aggressively slams her hands down on our table) What are you petitioning!!!!!! (she thought we were collecting signatures for a well-publicized anti-affirmative action measure) o We hate guns! o We aren’t used to guns where we’re from. o Sure, I’ll sign. o Didn’t you hear about the Supreme Court decision? o No, I can’t sign this petition, my brother’s a hunter. o I can’t sign, I’m a marine. o Are you being paid to collect these signatures? o I own a gun and need to protect myself from all the illegal guns out there. o You mean this petition is for the elimination of ALL guns? Whoa, no I can’t sign this. o You’re telling me that you want to take away my gun? What about hunting? o Hey, I think I missed you’re performance piece today, how did it go? (my reply was that the piece was happening right now) o What’s this got to do with the Bemis? HEY! you didn’t answer my question, what’s this got to do with art? o How would I protect my family and home? o This is a great idea, but I don’t think it’ll ever happen, especially with the Supreme Court ruling the other day.

o Most individuals were supportive o After getting them to sign or start signing, we’d spend lots of time with small talk (the storm earlier in the evening mostly) o If someone was in a hurry, they’d say that we’d have to walk with them if we wanted them to listen (they ultimately would decline to sign) o We would indicate that the recent Supreme Court ruling was a federal ruling, but our petition was local. We would take liberties with legal precedent and wouldn’t really be questioned about the validity of our claims. o We could tell when someone didn’t read the petition because they would just sign or they wouldn’t comment on the bunny sculpture mentioned at the end of the petition. o Most that read the entire petition would ask where exactly the bunny would be placed. 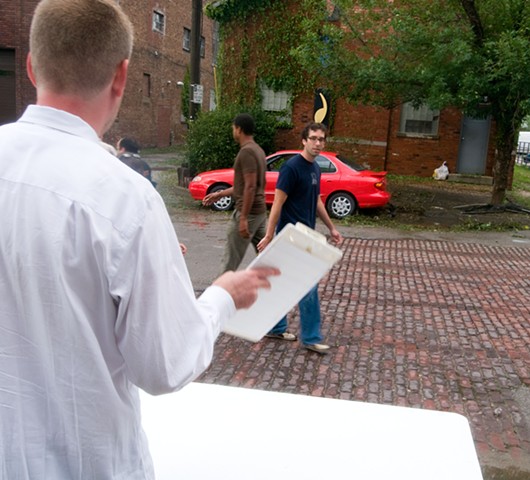 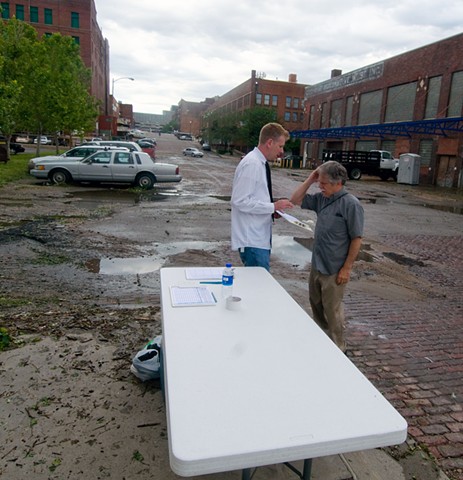 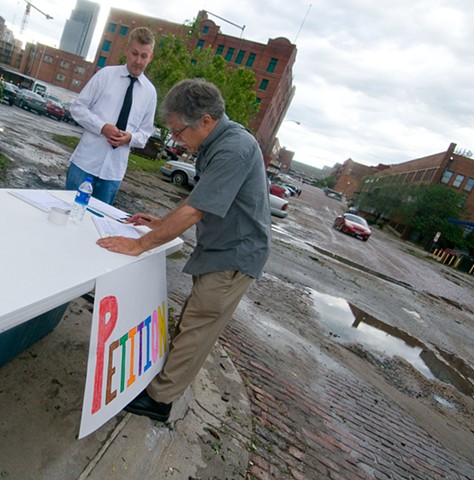 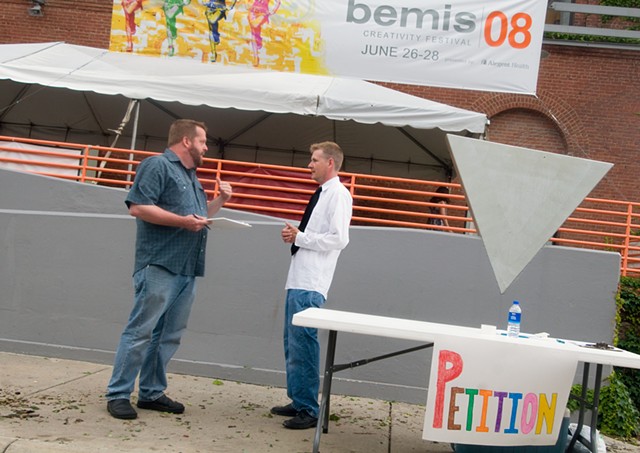 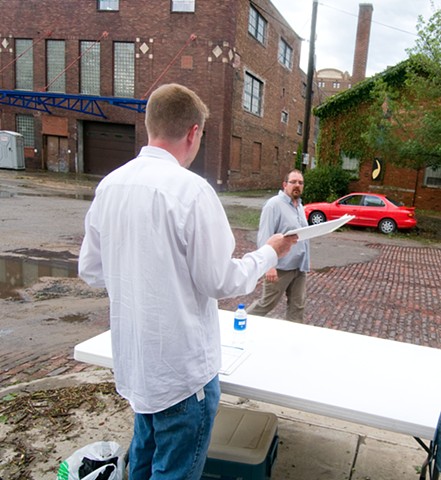 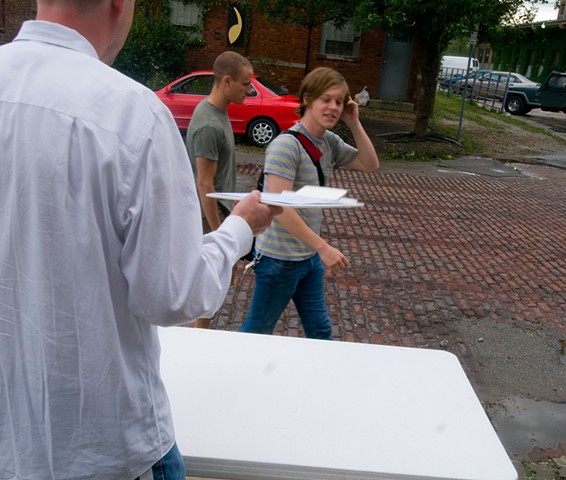 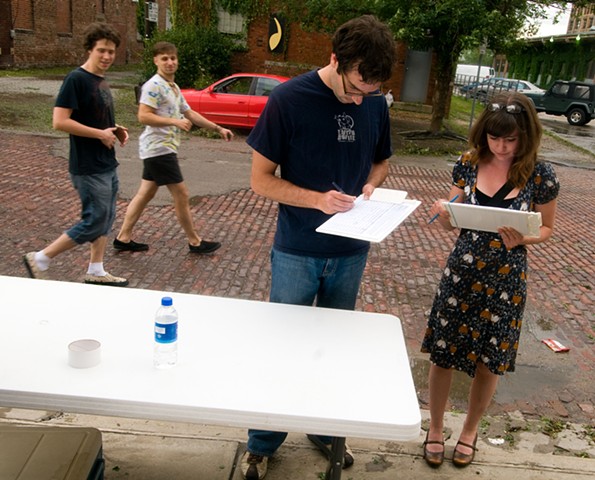 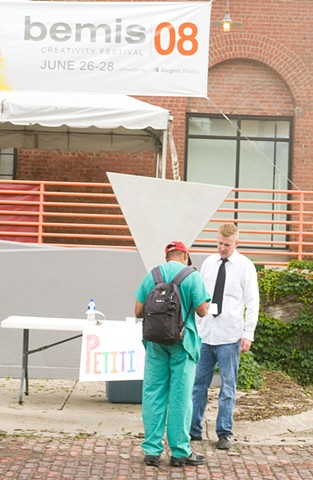 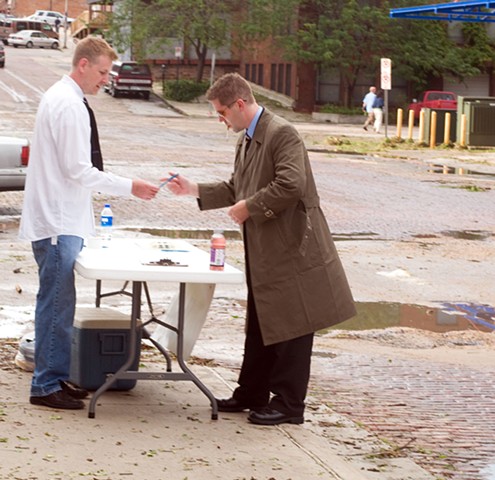 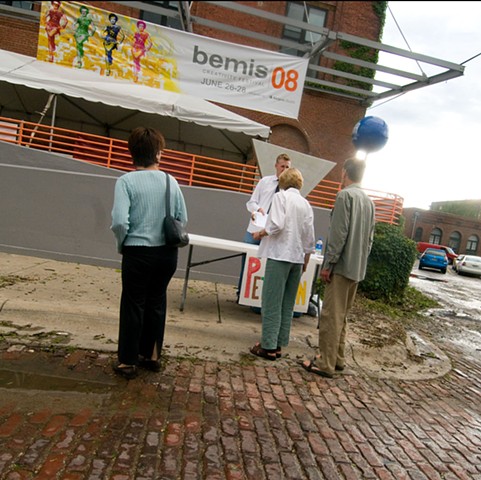 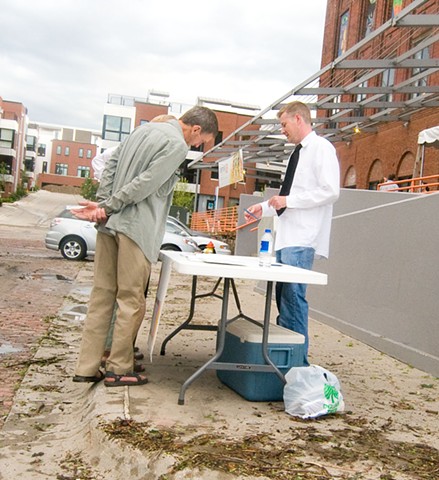 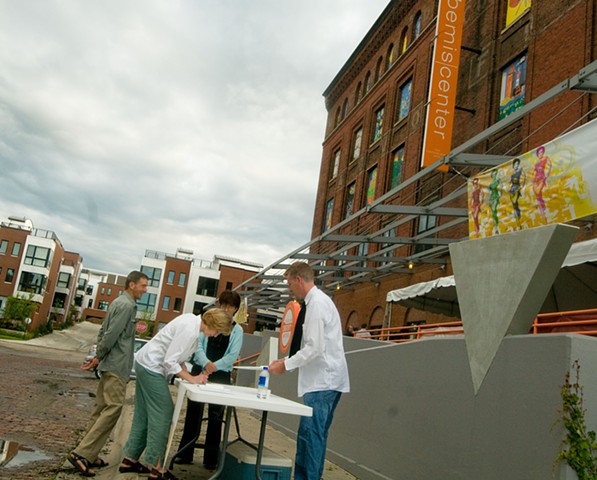 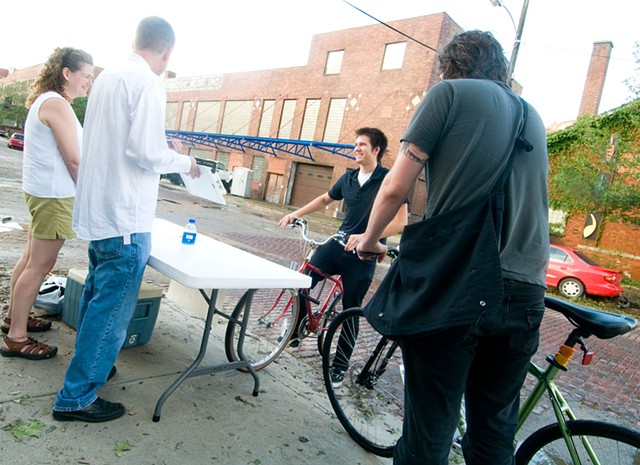 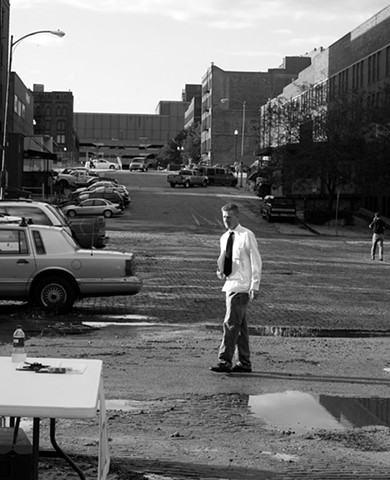