Description: Yellow caution tape cordons off the perimeter of the fountain in front of St. John’s Church. Two to three individuals act as site controllers. They have placed the caution tape. A vehicle drops off two individuals in white decontamination suits at the far west-end of the Creighton mall. One carries a small course-bristled push broom and the other a clear plastic bag. They make their way to the fountain. They sweep and collect debris that exists in the area.

A yellow round-ish mascot-like figure and a cheerleader appear at the site. The mascot has a very happy and smiling face. It is snot. The ‘snot mascot’ has boxes of tissue that it hands out (while supplies last). On the back of the boxes of tissue is information about mucus and its benefits to the human body. The cheerleader assists the ‘snot mascot’ in handing out the tissue boxes. Every so often, the cheerleader cheers “HOORAY FOR SNOT!” The figures with the push brooms clean the area of debris. (NOTE: debris is not placed in the space. Anything picked up is ‘naturally occurring’ or existing trash, sticks, leaves, etc.) At the end of the hour, the mascot and cheerleader leave the site via the east-end of the campus. The decontamination crew removes the caution tape and leaves the campus at the circle driveway by Deglman dormitory. A vehicle drives them away from the campus.

This piece explores the concepts of marketing by focusing on the bodily function associated with mucus production, with the decontamination team in the background as a metaphor for mucus itself. For the health-related fields Creighton University is known for and especially in the Creighton mall where so many wares and causes are peddled, the promotion of the seldom-praised excretion seems especially appropriate. 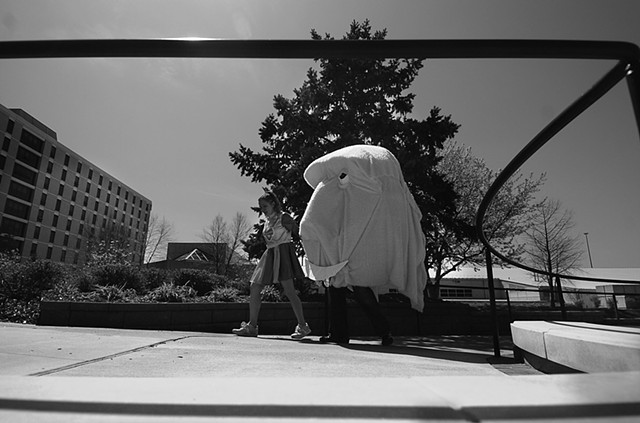 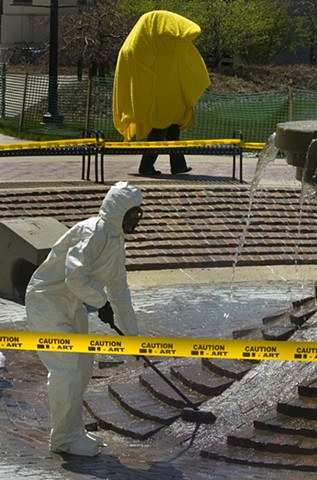