This performance piece took place from 8:00pm to 10:00pm at Omaha Urban Storage at 13th & Leavenworth as part of the group show The Science Fair.

Description of live art event: A narrow but deep space (approximately 10’ wide, 40’ deep, 20+’ high). Opening/entry at one end. The back of the space from the opening is barely visible. The back of the space is lined in a white canvas material. The front of the space is littered with fast-food debris/trash that piles at the fence and extends toward the back. There is also a bucket filled with yellow liquid. The space is dark. Only ambient light. The opening of the space is covered with chicken wire. A sign hangs above the opening. It reads “Fag Shoot $1”. There is a second sign the sits to the side of the space that reads “Young Republican Shoot $4”. There are stuffed animals that hang from the fencing along the bottom of the sign and along the left side of the fenced opening. There are small lights outlining the sign as well. A crudely hand-written sign hangs from the fencing that indicates “On Break”. An attendant runs the game. He is young Caucasian (16-20 years old). He sits at a side table and reads Nicomachean Ethics. Those that inquire about the game, he indicates that he’s “on break” and that he’s waiting for his boss “Donnie” to get back. He doesn’t explain the game unless asked directly. He explains, “Oh, it’s ‘Fag Shoot’. You use this gun and shoot the fag and if you hit him you win a prize. Like one of these stuffed animals.” He indicates how the paintball pistol works. He might also take opportunities to show them how it works by shooting a shot into the space. Only if pressed, does he allow a customer to shoot. Otherwise, Donnie never arrives and the attendant sticks to his break for the duration of the performance piece.

The subject of the “shot” is a Caucasian male (30-40 years old), dressed in a white t-shirt and white boxers. He appears beaten and bruised. His hands and feet are bound with handcuffs and white nylon rope to the back of the space. The rest of him is free to move, but he is not able to move far. He sits/squats mostly. He is terrified. He is crying/whimpering for the duration of the performance piece. He speaks in a language that is not English. He pleads with those in earshot.

A glass jar sits next to the attendant’s table that has six single one-dollar bills in it. 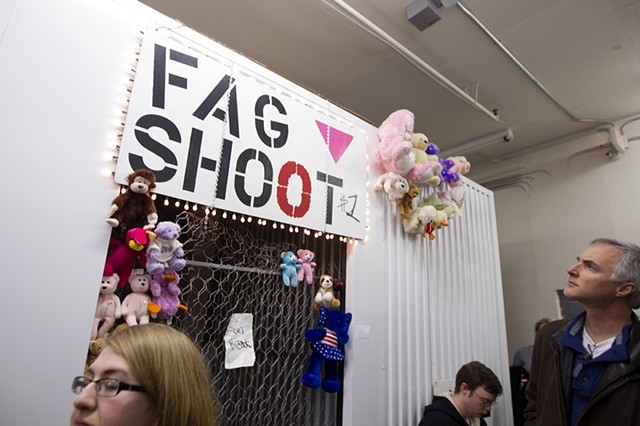 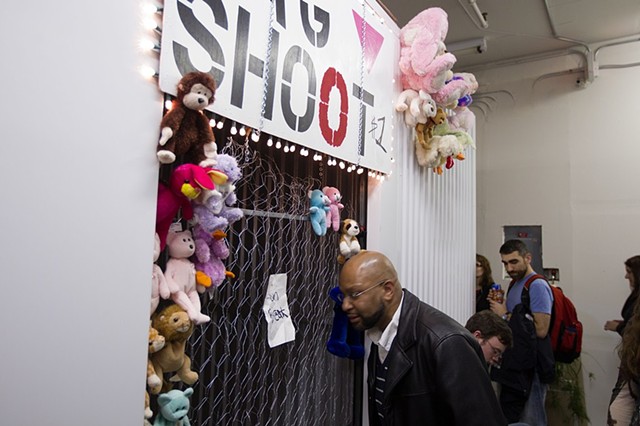 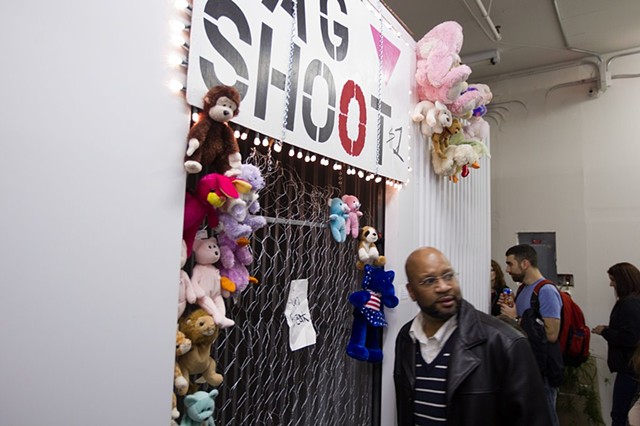 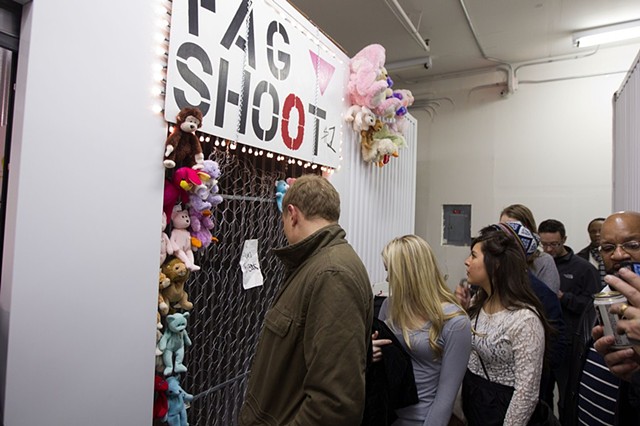 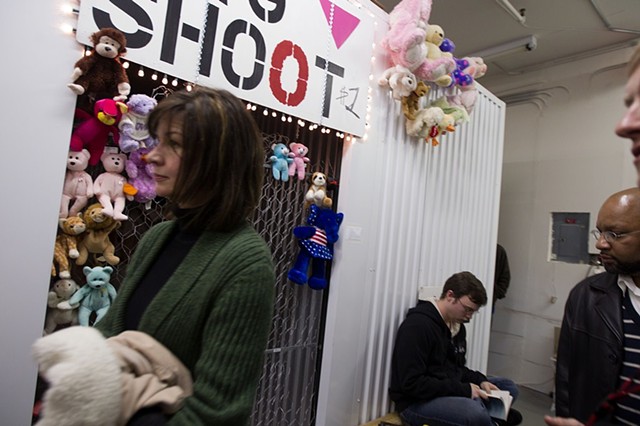 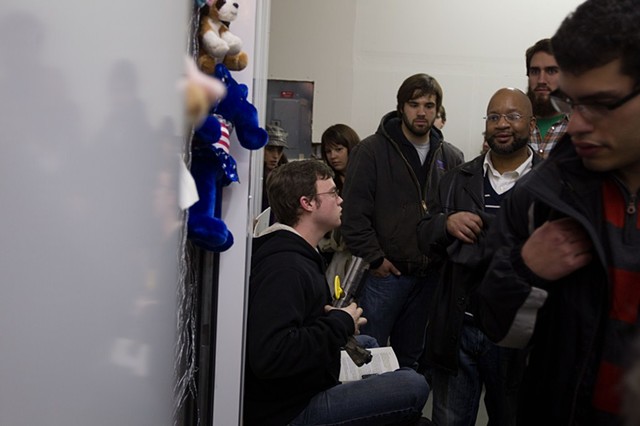 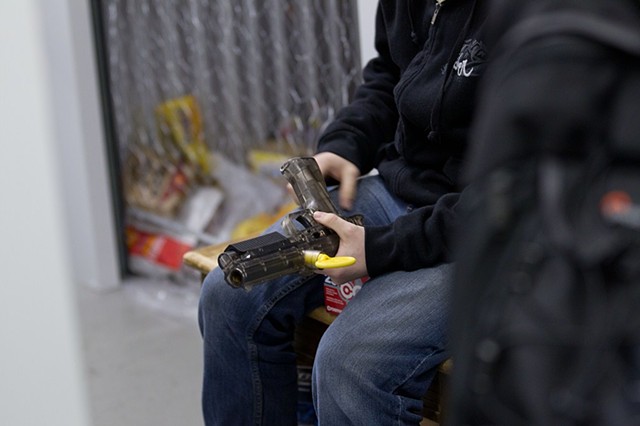 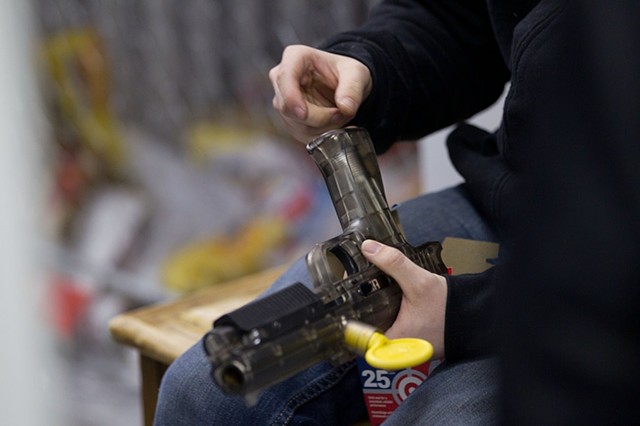 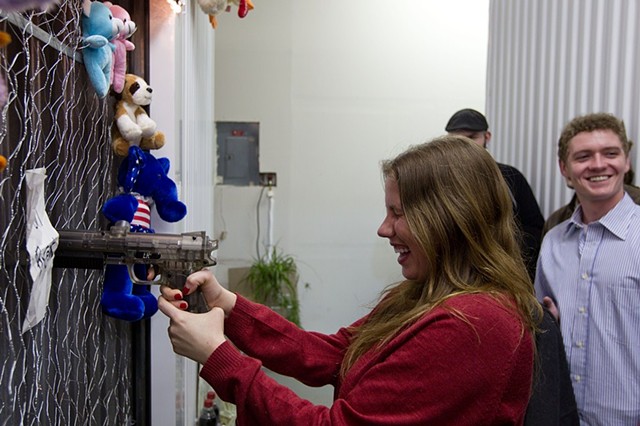 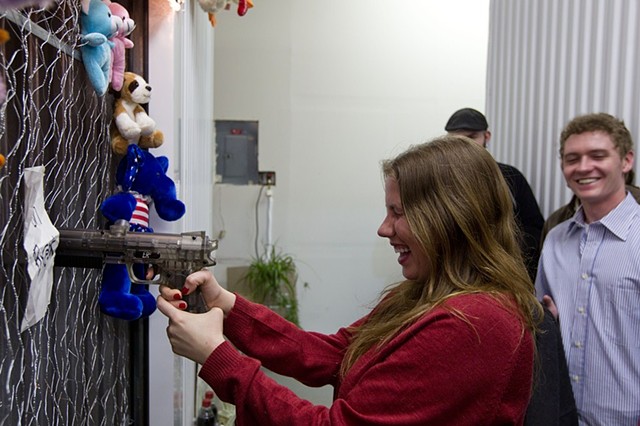 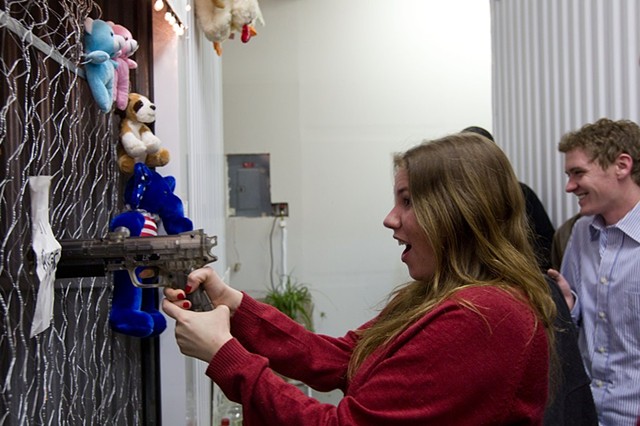 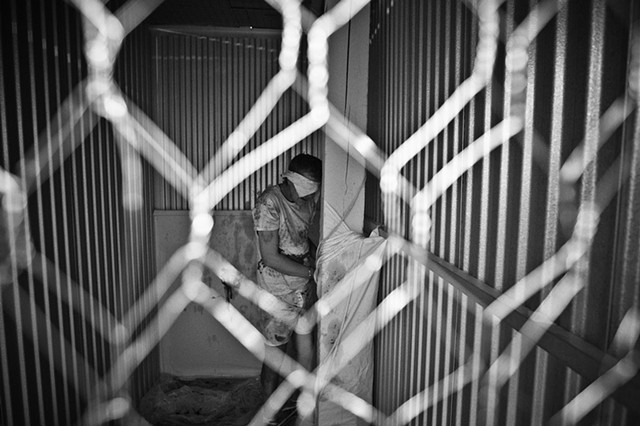 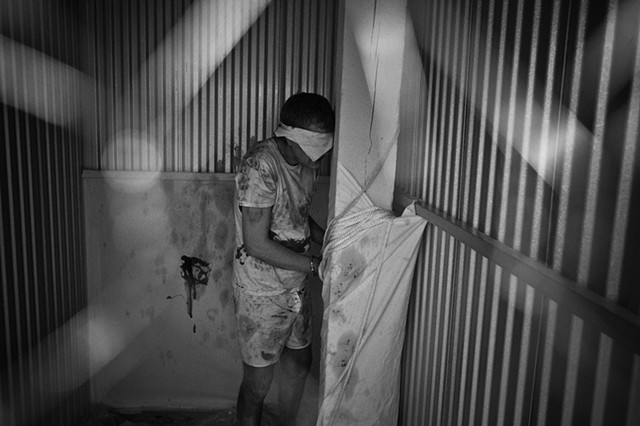 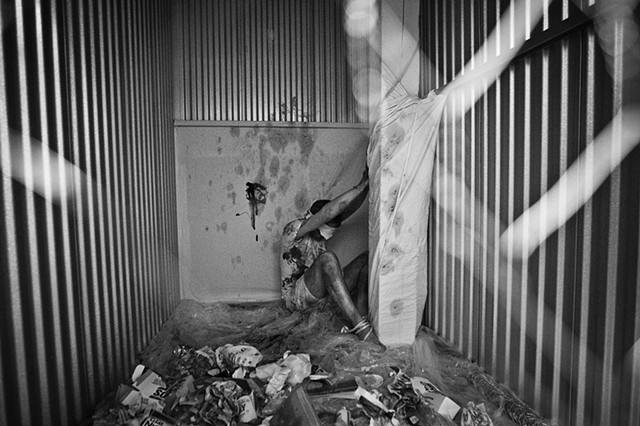 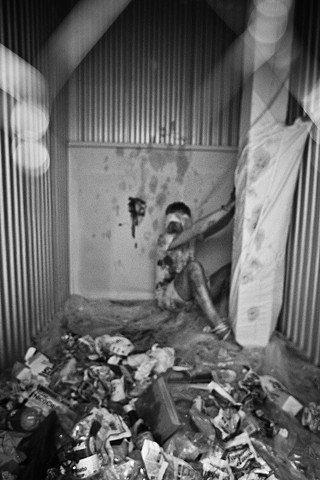 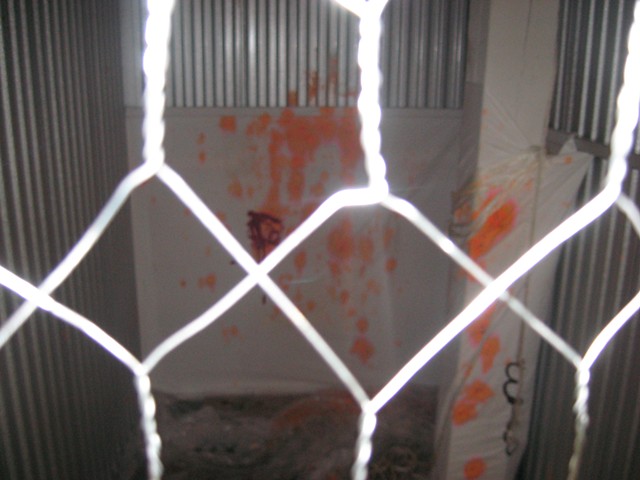 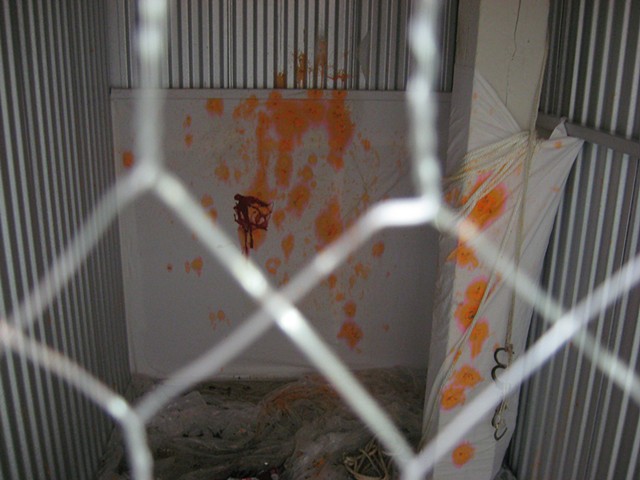 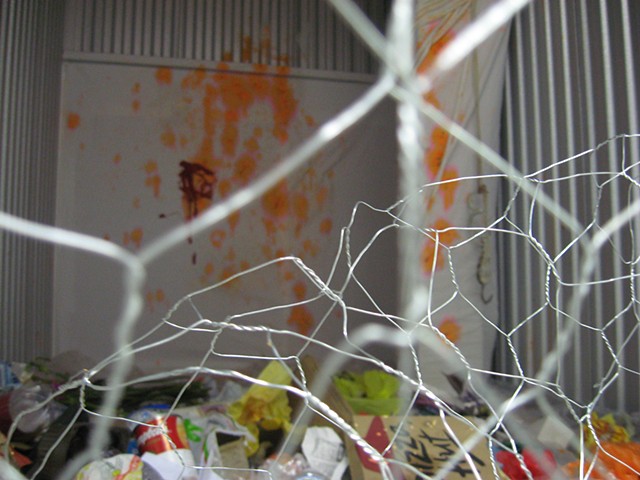 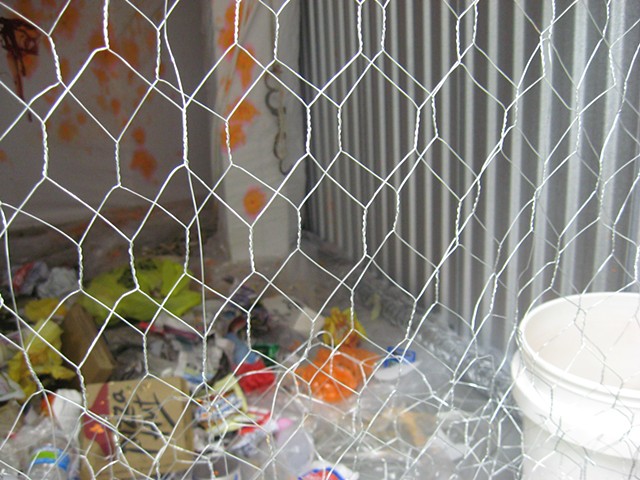 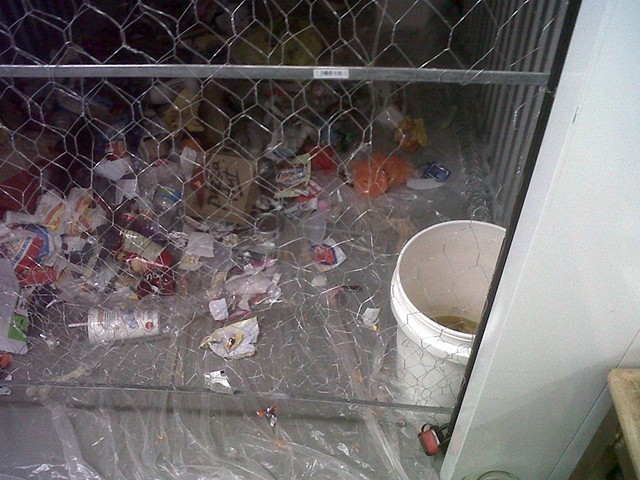 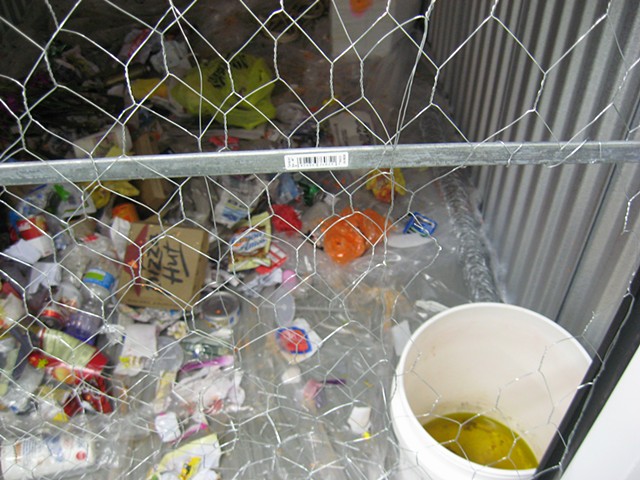